I’ve been attending a large museum conference all week. I presented earlier in the week about my project on how museums teach 21st century skills — but more on that in a separate post.

I attended a session today about how to present technology issues to your board. The session was of interest because we often have to explain to people (boards and others) about technology budget requests, why we want to move to a new system, etc.  I knew or knew of a number of the presenters, and I knew it would be an interesting and provocative session. 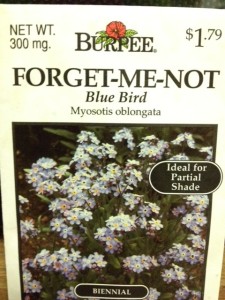 There were a number of good points made during the session, but one really stuck out:

The presenter that talked about this concept related a story about a project he proposed once. The group he proposed it to dismissed it immediately, without any discussion or thought. Four years later, that same group proposed the exact same concept and it passed readily! He related this to planting the seed, tending the garden and making it a rich environment in which these ideas grow.

This seems to be my experience working with the schools my kids attend. For the last year, I have been knocking at their doors, asking questions, suggesting ideas, and generally letting them know I think they need to pay more attention to technology and 21st century learning.

It has been frustrating, as I’ve stated in past blog posts. Often, they are too busy to talk. They are dismissive, as if I’m just another annoying parent with issues. They infer that they are the educators, thus know more than I do about this. Or, there is no way I, as a parent, could possibly know what it is like in the classroom. I offer to volunteer, to train, to help out — and I am turned away. And more. It’s been frustrating.

However, I have to admit — I see signs of the seeds taking hold, and maybe starting to sprout. One school rolled out Google Apps for the students fairly quickly. At another place, an administrator asked to meet with me about my work.

Like the presenter today, I have to give it time. As he said, the time between his idea and the adoption was long, but he worked to make people understand his idea — slowly, one step at a time. He was far ahead of them the first time. They needed time to catch up.

While I want the schools to move faster, I have to realize that they have other issues to deal with, and they need to get their thinking to the point where they see the advantages of moving ahead — and disadvantages of the current set-up. They have to be at a point where staying put is no longer an option, where it’s not a threat when their day-to-day work needs to change.

Planting a seed. Maybe if I have that as my goal, rather than full-blown tech integration and teaching of 21st century skills, I’ll feel more successful. Maybe there’s hope. I just hope it doesn’t take four years.